Does EasyJet’s pivot away from carbon credits mean airlines are cooling on the carbon market?

Does EasyJet’s pivot away from carbon credits mean airlines are cooling on the carbon market? 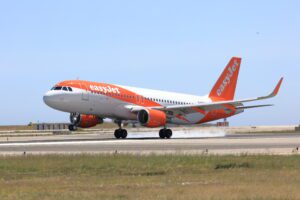 On 26 September, EasyJet announced a pivot in its sustainability strategy to end the purchasing of carbon credits and focus on technology solutions to achieving net-zero emissions by 2050. Although the company’s emissions targets are unchanged – a 35% cut in carbon emissions per passenger kilometre by 2035 – the decision to stop buying carbon credits has raised concerns in the voluntary carbon market as airlines have been some of the largest buyers of credits.

In the period from November 2019 to August 2022, the company retired a total of 8.5 million credits, making it the sixth largest retiree of credits in last five years. In 2021 EasyJet retired 2.1 million carbon credits – representing 1.3% of the market – including those from projects to reduce deforestation in Ethiopia as well as wind farms in India and Turkey. Delta Airlines has been the largest user of carbon credits, retiring over 50 million credits since 2018.

Does EasyJet’s decision suggest airlines are cooling on carbon credits to achieve their climate aims? In the short term “perhaps”, but several factors are at play in EasyJet’s decision. In the medium to longer term, we could certainly see this decision being reversed.

Firstly, EasyJet, like many other airlines, has been under financial pressure for a number of years, hit first by Covid in 2020 and then the oil price rise since the Russian invasion of Ukraine in Feb 2022. EasyJet made losses of around EUR 1bn in both 2020 and 2021 (following £350m profit in 2019) and its shares have fallen 54% in the last 12 months. In this economic climate, all expenditures have been under the spotlight. At a carbon credit price of £5-10/tCO₂, ending the purchase of carbon credits would save the company £10-20m/yr.

Secondly, if the company were to continue buying carbon credits within a limited budget, there is a risk that it would seek out the cheapest possible sources. This could bring with it reputational risks, as cheaper credits tend to be lower “environmental integrity”. Cheaper credits tend to be from older projects – potentially from activities taking place over ten years ago – or from projects with dubious additionality claims. Trove Research has shown the importance of integrity in the carbon credit market and that high integrity comes at a price.

Thirdly, EasyJet did not say when it announced its net-zero strategy in 2019 that it would go on buying voluntary credits for ever. Its statement back then declared: “Carbon offsetting is only an interim measure while new technologies are developed.” EasyJet’s new plan has a longer-term trajectory to net zero involving a move to ‘zero-emission aircraft’, using sustainable aviation fuels made from biomass, and potentially hydrogen as fuel. The company’s overall 78% reduction in emissions intensity by 2050 would be topped up by ‘carbon removals’ (capturing and storing CO₂ from the atmosphere), to reach net zero. However, the commitments to clean technologies in most recent plans are, in effect, little different to those in 2019, implying that the decision on carbon credits is mostly driven by the need to save costs.

The focus on clean aviation technologies to achieve long term climate targets, whilst laudable, struggles under economic logic. The cost of reducing CO₂ emissions using sustainable aviation fuels is currently x50 to x100 of that using carbon credits – $450-500/tCO₂ saved compared to carbon credits at $5-10/tCO₂. Put another way, for the same expenditure EasyJet could achieve at least 50 times the climate benefit using carbon credits. Admittedly, carbon credit prices may rise as demand grows, and sustainable fuel costs may come down as techniques improve and the biofuel industry achieves greater scale, but the gap is unlikely to be fully closed.

This economic rationale underpins the Carbon Offsetting and Reduction Scheme for International Aviation (CORSIA) which requires international flights to use carbon credits to offset any increase in emissions from 85% of 2019 levels. The same principle applies to the inclusion of intra-EU flights in the EU emissions trading scheme, where airlines are able to buy credits from the wider market covering sectors such as power generation, steel mills and oil refining.

EasyJet’s focus on hydrogen-fuelled planes and direct air capture of CO₂ for the period 2035-2050 is betting on highly speculative technologies. Hydrogen as an aviation fuel has much to prove – on the pace of possible cost reductions, and on safety for air travel – while the latter is hugely costly, estimated at $400 – 1000/tCO₂ captured and stored, with limited prospects for swift cost reductions.

A final concern over the reliance of the bet on clean aviation fuels, is the lack of transparency in the company’s impact. Corporate investments in technology are rarely disclosed, which makes it difficult for stakeholders to track corporate efforts to control emissions and compare them with other companies. Carbon credits have a very clear process of transaction and retirements.
If EasyJet, and the rest of the aviation industry, is to make a serious attempt to reduce its carbon footprint, a solution that enables airlines to invest in projects outside the sector is going to be essential. For the foreseeable future therefore, it looks like carbon credits will be the instrument of choice, even with their imperfections and flaws.

To find out how your organisation can benefit from Trove’s Intelligence Platform, schedule a demo with our team.

Sign up to receive a weekly digest on corporate climate commitments and action from around the world.

When you visit our website, it may store information through your browser from specific services, usually in the form of cookies. Here you can change your Privacy preferences. It is worth noting that blocking some types of cookies may impact your experience on our website and the services we are able to offer.

We use cookies to give you the best online experience. By clicking I Agree and/or continuing to use our site, we assume you are happy to proceed with our default privacy settings, or, if applicable, the settings you have selected via Privacy Preferences.